From 19 to 26 January 2017, the “Centre for Applied Sciences” conducted a survey of expert opinions in the government-controlled part of the Donetsk and Luhansk regions. With a help of the Delphi method, 89 people were interviewed – representatives of government bodies, business circles, educators and public activists in the city of Mariupol, Kramatorsk and Severodonetsk.

The survey participants, determining the severity of some social problems at the regional level, placed prioriies as follows (from the most urgent problem to less important): 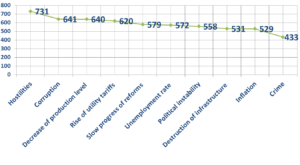 Apart of this the respondents mentioned such specific issues as impunity for officials in case of offenses; low social activity of the population; poor informing of society; ecological situation; migration – departure of population of the region; identity crisis; uncertainty about the future; lack of investments; fiscal burden on business; instability of tax legislation.

Do you feel safe in your own city? 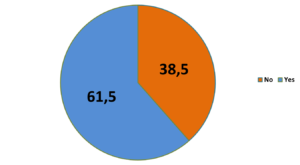 What are the priorities for Donbas restoration?

The next priorities were pointed in an open question: 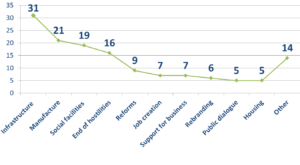 What are the priorities in EU-Ukraine relations?

Determining the priority areas of relations between Ukraine and the European Union, respondents named the following: 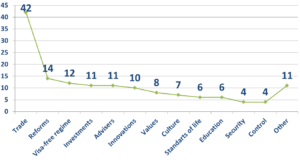 Do you feel support of European Union in the conflict in Donbas?

Assessing assistance from the EU, 62 respondents (69.7%) said they feel support from the European Union in the settlement of the conflict. Instead, 27 respondents (30.3%) answered negatively to this question. 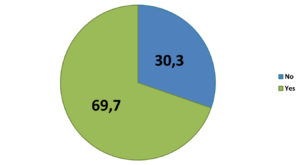 In what extent preserving of economic ties with Russia

are important for Donbas?

A point of view that the Russian market and trade partners are “important” for the development of the region became the most popular answer to the question about the preservation of economic relations with Russia (37 respondents – 43.5%). The opposite point of view expressed by 28 persons (32.9%). “Does not matter” opinion  was considered by 14 persons (16.5%); instead of “very important” – only 6 people (7.1%).

Thus “for” and “against” opinions about saving economic bonds are shared by the same number of people – 43 and 42 respectively (50.6% and 49.4%). However, among the opponents of cooperation with Russia twice more people who clearly define their position. 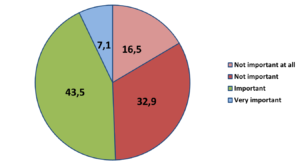 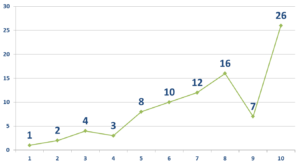 What sources do you use to get information about European integration of Ukraine? 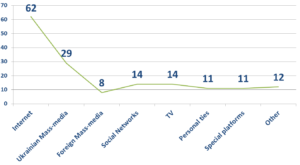